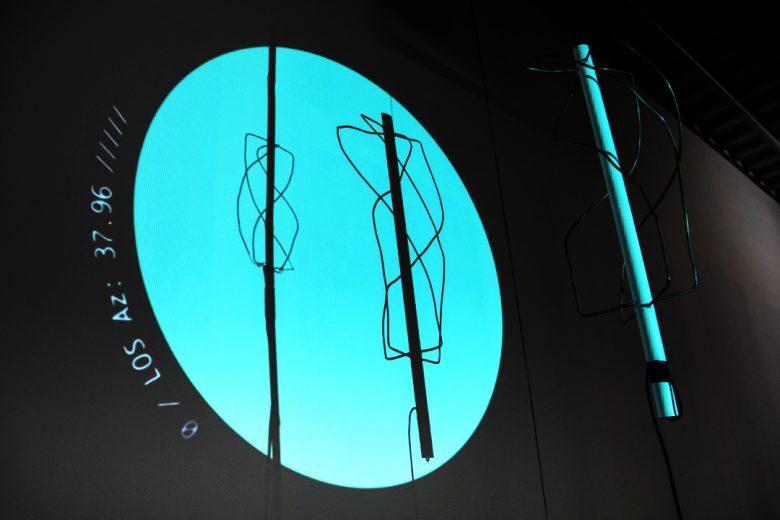 We were listening but they didn’t have anything to tell us is a piece developed in collaboration with Erica Sklenars, Charlotte Parallel, & James Hope as part of the Electromagnetic Geographies workshop commissioned by Urban Dream Brokerage.

As part of the workshop, Julian Oliver invited a range of artists to a one-week workshop in which we worked with open-source tools and software-defined radio to reveal the invisible electromagnetic spectrum in Wellington. The workshop was followed by an exhibition in a vacant inner-city space on 106 Cuba St, 25 May 2021 – 30 May 2021.

At the heart of We were listening but they didn’t have anything to tell us sit two Quadrifilar Helix (QFH) Antennas built from scrap metal, PVC piping and bamboo. The antennas were specifically designed following a careful plan measured out for the transmission wavelength of the FM transmission of the International Space Station (ISS). The large antenna is optimized for 145.800 MHz, while the smaller one for 437.800MHz.

The exhibited piece includes the two antennas in combination with a light projection showing the optimal passes of the ISS for the duration of the exhibition. Unfortunately, the ISS was not transmitting SSTV during the workshop so we could not receive anything but noise until August 2021, when the ISS did a 2-day broadcast, which resulted in a successful capture of an image, proving that the antenna design was functional.